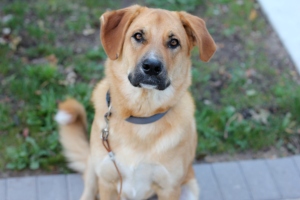 Did you sleep okay?

Do you want to go outside?

Mack is still around. His rebellious days and puppy antics are over. Even after I asserted that he was too good for daycare, I took him to another facility and that did not work out either. As they say, his reputation precedes him.

I also put the kibosh on humping when an owner threatened to charge me for dog therapy. Yes, Mack is quite the humper. He inflicts emotional damage. (Confession: That did not really happen. It was an excuse to link you back to an old MEB post.)

Thankfully, Mack no longer picks up half dead animals and shakes his clenched jaw like a ravaged beast. I am hyper vigilant on walks and at the dog park to prevent this from happening. If he beats me to a mangled crow on the sidewalk, I say to him, “Go ahead, buddy. Eat Crow.”

Mack exists in a less obtrusive, kind of casually annoying way now. He mostly lays on any carpet he can find or rests his chin on the front window sill, alert to nothing and everything going on outside. He gets up on the couch while The Love of My Life and I are in the other room. When I catch him up there, he painstakingly lifts his head and looks at me as if I am the one disturbing him from the comfort of his new couch. He groans and I imagine him wondering where his friend Guinness is or when Porter is coming back to play.

The almost four year old Mack is not as exciting as the six month old Mack, but his constant presence is comfort and he never tires of greeting someone at the door. He only wants a chance to walk outside a few minutes a day, get some sniffs in and three cups of the same meal he has been eating since the day he moved in.  If only life were that simple for all of us.

Hey Early Bird, Tell Us What You Think. Cancel reply

Hey Early Bird, What Do You Want To Do Today?

Freshest of the Fresh

MEB Does Not Disappoint.